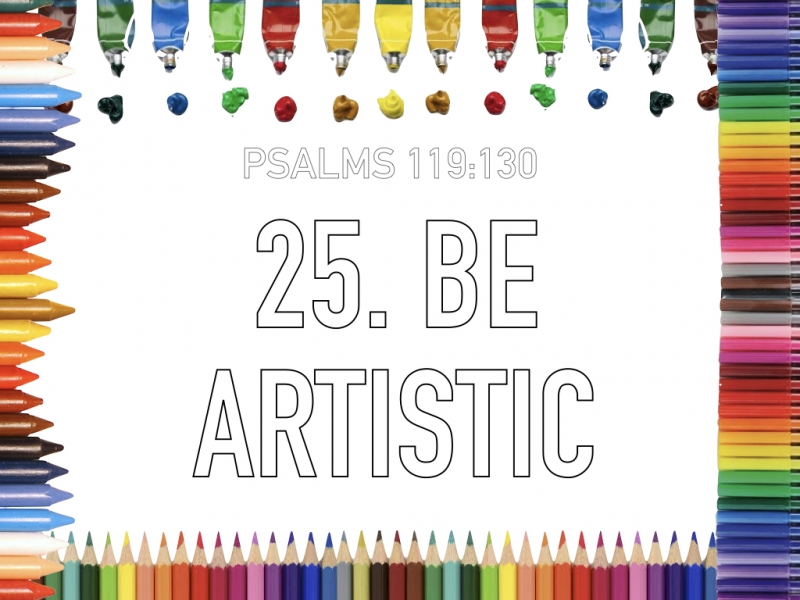 Psalm 119:130-The unfolding of your words gives light; it gives understanding to the simple.

There was once a little boy in a kindergarten Sunday School class whose teacher asked them to draw a picture of the lesson. His little hand got busy drawing a picture of a bearded man with a robe. He carefully had doodled the stars and the moon on the man's robe. The other kids had all drawn pictures of little kids and this same bearded man. The teacher asked the boy to explain his picture. He said "I drew night on the Lord." The lesson was from James 4:8 which reads, "Draw nigh to God, and he will draw nigh to you..." (KJV).

It's funny that we express ourselves as kids with crayons, play dough, watercolors, and glitter but as adults we rarely even pick up a pen. When did we "outgrow" using these means to praise and glorify God? When did we get so caught up in being an adult that we can't express our relationship with God in artistic media?

Recently I started adding some picture art or "memes" to my blogs. On one occasion I was embarrassed because I violated copyright laws by posting a picture that I didn't have permission or pay the royalties. I have to plead ignorance because I didn't know that these things are also covered by copyright laws. But ignorance does not absolve guilt.

So now I make my own pictures or "memes". I don't know that they are as cute or memorable as other pictures that are floating around but if I make them I know they are legal and genuine.At first it was a labor, an inconvenience, and awkward. But now I like it. I find it is a way to express myself and my thoughts on the scripture.

My mother has joined the craze of "adult coloring". On our last visit "up north" she showed me some of the beautiful coloring books she has colored. Some of them are scripture art that are very inspiring.

There was a young student who used to offend me because he doodled on an art pad while I was teaching class. One day after class he showed me a wonderful drawing of a dragon like creature. He began to tell me how that dragon was the evil that we had been talking about in class and how it could only be destroyed with the sword of the Spirit, God's Word. I since have been less annoyed with his drawing in class because I know he got the message and was expressing himself. It was his way of taking notes.

May God bless you today as you express your heart and his word in an artistic way. May he use your art to bless the lives of others.

PRAYER THOUGHT: Dear Creator God, You expressed yourself in creation by poetically speaking all things into existences. May your creative words speak to my heart and be expressed in the work of my hands and songs that I sing. In the name of Jesus Christ, AMEN!