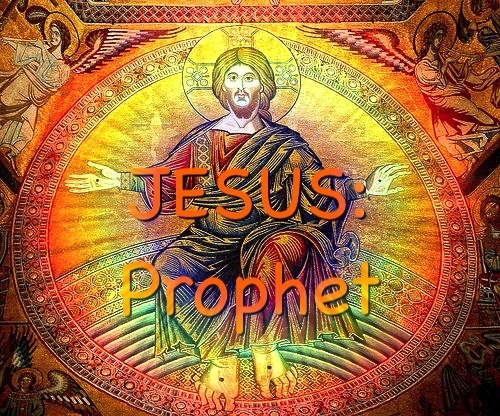 24. Prophet – “And Jesus said to them, “A prophet is not without honor, except in his hometown and among his relatives and in his own household.” Mark 6:4

I sometimes wonder if even the many adults really know. We often look at a prophet as one who foretells future events. But as a friend of mine recently said, "There is more forth telling of a prophet then there is foretelling."

A prophet is first and foremost a man with a message from God. Some of these men are willing to go and take the message. Isaiah, once purified, said, "Here am I, Lord. Send me."

But there were also those like Jonah who didn't want to go. Jonah decided to go the other way and he ended up fish food...sort of. And who really would blame them? Prophets were often rejected, beaten, dishonored, imprisoned, ridiculed, and put to death. It wasn't glamorous to be a prophet.

A prophet sometimes told what the future would hold. He would bring a message to the people that sometimes would tell of an impending event in the immediate future but also had an ultimate outcome or a promise of delivery in the distant future. But mostly he simply shared the word of God.

Sometimes it is easy for us to forget that Jesus was also a prophet. It always amazes me how many times he told his followers his plans. He told them that he was going to die and be raised again. But they either dismissed this, spiritualized it, or just didn't get it. But Jesus literally meant that he was going to die for our sins and be raised in victory over sin and the grave.

In Luke 4:14-30, Jesus is reading the scriptures in the synagogue of his hometown of Nazareth. He reads Isaiah 61:1,2 which is like a job description of the Messiah/prophet. Then he tells them, "Today this scripture is fulfilled in your sight."

1. Jesus was anointed or sent by God

4. Jesus gave sight to the blind... but he also gave spiritual sight to those who were blinded by sin

6. Jesus proclaimed the day of the Lord... his coming kingdom

But they said, "Hey, we know this guy. He's one of us." So they reject him... even try to kill him. And people are still rejecting this prophet today.

Jesus proclaimed the message of God faithfully. He also foretold the immediate and future events coming. But more than that this prophet also fulfilled 355 prophesies of the Old Testament that all had to do with the Messiah to come. And as a faithful prophet he stands today at the right hand of the throne of God.

I praise God for My forth telling Prophet, Jesus Christ. May you be blessed today as this prophet is revealed to you.

PRAYER THOUGHT: Dear God, I know who holds my future because of Jesus Christ. I praise you for revealing that to me in your word. I praise you for the beautiful promise of eternal life. Forgive me of the times that I have doubted or failed you. Lift me up so that I may plainly see what is written for me in your word. Thank you for Jesus, my prophet, my priest, my king! In his precious name I pray, AMEN!